Hedge fund billionaire Paul Tudor-Jones believes Bitcoin may take up a position as the gold standard of crypto. Unfortunately by also comparing cryptocurrencies to internet stocks in the 1990s, he has unveiled a fatal flaw in his reasoning.

Bitcoin is far and away the most famous cryptocurrency. It is currently surging to record highs, and garnering a historic amount of interest among major institutions and billionaires. Paul Tudor-Jones is one of the most high profile individuals in the investing world to stake a portion of his assets in BTC and may be partially responsible for the Wall Street interest.

In a recent interview, Tudor-Jones told Yahoo Finance he believes Bitcoin will be comparable to a precious metal, while other coins may be more like the industrial metals used for daily use.

Curiously, in the same breath, the billionaire also states he believes that digital currencies remind him a lot of internet stocks in the 90s as they demonstrate massive potential and massive uncertainty.

If we take a look at the history books, it tells us that the world of tech innovation is nothing like the metals market.

Being First Means Little In The World Of Innovation

If I told you that Microsoft didn’t make the 1999 Wall Street journal’s list of the top 10 tech stocks of the 1990s you might be surprised. You might be more surprised that the rather mundane Dell Technologies might have been a more attractive investment to many people. One is now worth over $1 trillion and the other just $50 billion. It’s not hard to guess that MSFT is the former and Dell the latter.

Looking further back, consider the Computing-Tabulating-Recording Company (CTR) of 1911. Ultimately this was to become “Big Blue” otherwise known as IBM. Worth barely a tenth of Amazon, Microsoft, Alphabet, or Apple today, being early didn’t give them an innovation edge. It actually may have worked against them as others utilized the progress they made against them.

This is why Paul Tudor-Jones and others on Wall Street must choose what they want from bitcoin. It is either comparable to gold, which has not changed in thousands of years, or an early tech stock that could be impacted by a breakthrough at any moment. 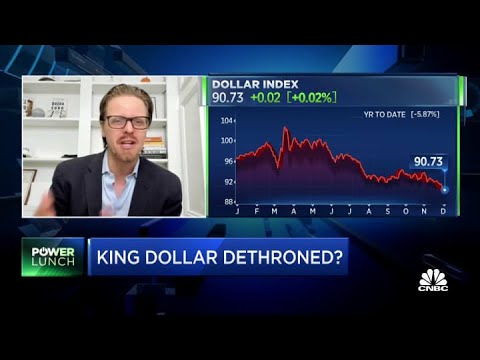 Unfortunately, this is the real problem when it comes to valuing cryptocurrencies. Bitcoin bulls would have you believe it is both the alpha and the omega. The first and only store of value, and as a result the final advancement needed to solve the fiat problem.

Tudor-Jones Needs To Pick A Side

For this reason, Paul Tudor-Jones needs to get the story straight in his own mind. If cryptocurrencies are comparable to the internet in the 1990s, then BTC’s position as a frontrunner is far shakier than its dominant market cap suggests. The fact is that cryptocurrencies are a product of technology, and thus on a constantly evolving timeline. You can have no gold standard because evolution happens constantly and influence ebbs and flows.

If bitcoin is the crypto to end all cryptocurrencies, it’s the first time that a technology’s final form came first.