Revealed exclusively to CoinDesk, Misthos launched its multi-signature wallet Monday on top of Blockstack‘s decentralized application platform. One of the first enterprise products launched on Blockstack, the wallet is designed for project teams, investment partnerships and other ad hoc ventures to manage the divvying up of income (received as bitcoin) among their individual members.

These organizations, which often form to carry out a specific objective before disbanding (more like a Hollywood production than a corporation), “want to have transparency into where their cash is going and want to be able to distribute their income in a fair way,” Misthos founder Justin Carter told CoinDesk.

To that end, all proposed payouts from a venture using a Misthos wallet must be approved unanimously by the partners in that venture. Carter described this model as “moving away from an employee-employer relationship to a group consensus about who contributed value.”

In other words, instead of a getting paid according to a salary or contract negotiated before taking on a job, the individual is compensated based on social consensus among the team. Misthos makes its money by collecting a 1.49 percent cut of the payouts.

Similarly, proposals to add partners are subject to approval by all the existing participants, and in order to kick one person out, everyone else in the group must agree to it. Several partnerships are already using Misthos to distribute bitcoin among members, including the four-person team behind Munich-based bitcoin publication Coin Trainer.

“It helps us create a transparent environment where contributions are rewarded fairly and democratically,” Marcel Kasper, one of the co-founders of Coin Trainer, told CoinDesk.

Eventually, this collaborative model could be applied to managing fiat currency income for projects as well, but bitcoin was a natural starting point, Carter said.

“We are starting to build out the product on bitcoin is because of the reduced friction, as we have no institutional dependencies,” he told CoinDesk, adding:

“Crypto-first is about first developing a financial service for the new platform (cryptocurrencies). And once the overall experience is well-defined, adapting it to the old platforms, integrating with legacy financial institutions operating in fiat.”

Misthos is part of a broader push across the cryptocurrency community to support less centralized employment models.

Opolis, for example, is a professional employment organization (PEO) that handles outsourced human resources functions such as benefits and payroll for employers. However, it caters to a specialized clientele, including blockchain projects and startups, and has close ties to ConsenSys, the ethereum design studio.

By the end of the month, roughly 300 Opolis users will be able to facilitate crypto or fiat payrolls, employee benefits, and tax documents through this one-stop-shop service provider. The company also runs an employment marketplace for recruiters and job seekers, and it has a grander vision of future “decentralized employment organizations,” or DEOs.

John Paller, a co-founder of Opolis, told CoinDesk his platform is optimized for individual contractors instead of corporate hierarchies.

“[Freelancers] can choose and vote on any benefits they want, any number of things, including things that are out of the scope of traditional options today,” he said. “For example, you could have part of your income go to a group investment model.”

Both Misthos and Opolis use decentralized data solutions of some kind for worker IDs and credentials, making it easier to recruit, onboard and offboard collaborators.

“There’s also storage that Blockstack provides, and part of that we’re leveraging,” Carter said of Misthos, which uses Blockstack IDs for logins and wallet management. “All the history of the ventures is all stored with the individual partners.”

Stepping back, it’s easy to see why these entrepreneurs see an opportunity in offering solutions tailored for project-specific, flexible employment arrangements. These days many of the ecosystem’s leading developers prefer to work independently. Turnover at crypto startups is particularly high.

In traditional freelance contract negotiations, “You have very little leverage,” Carlson said. “I want to be able to do this style of work but to scale it in some way.”

On the other hand, Carlson also emphasized the importance of training and mentorship provided by traditional employers. To bring bitcoin’s ethos to the workplace, some collaboration will need to take place offline, face-to-face. “I do my best work when I’m with other people,” she said.

Plus, in her view, it’s important to consider how crypto community politics, and arguments on social media platforms where “a lot of nuance is being lost,” could impact project governance on Misthos, which she nevertheless said offers a compelling idea for on-chain bounty management.

Carter agreed that much of the social governance will take place off of the Misthos payroll platform.

“The point Misthos steps in is for a form of documentation and execution,” he said.

This is why Jude Nelson, lead blockchain engineer at Blockstack, told CoinDesk such democratic projects will require both on-chain and off-chain coordination.

“On-chain smart contracts are likely necessary for users of a dapp who don’t know each other. But since all partners in a Misthos venture must know one another before signing off on a payment, they are able to coordinate pay-outs off-chain without needing a potentially cumbersome on-chain smart contract.”

Men and coins image via Shutterstock 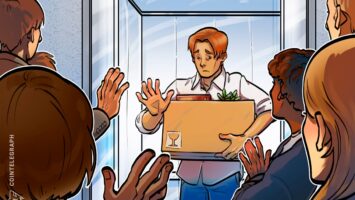