Crypto markets spiked today, August 21, seeing notable gains amongst the top 100 coins in under an hour, as data from Coin360 shows.

Total market capitalization of all cryptocurrencies shot up over $12 million in just over an hour to peak at $222.8 million, before dropping slightly to $291.7 million by press time.

Bitcoin (BTC) had been trading sideways today around $6,400-$6,500 before seeing a sharp 5 percent spike in the space of just 45 minutes, peaking around $6,790. The leading cryptocurrency has since dropped slightly to trade around $6,715 at press time, stil up about 6.2 percent on the day. 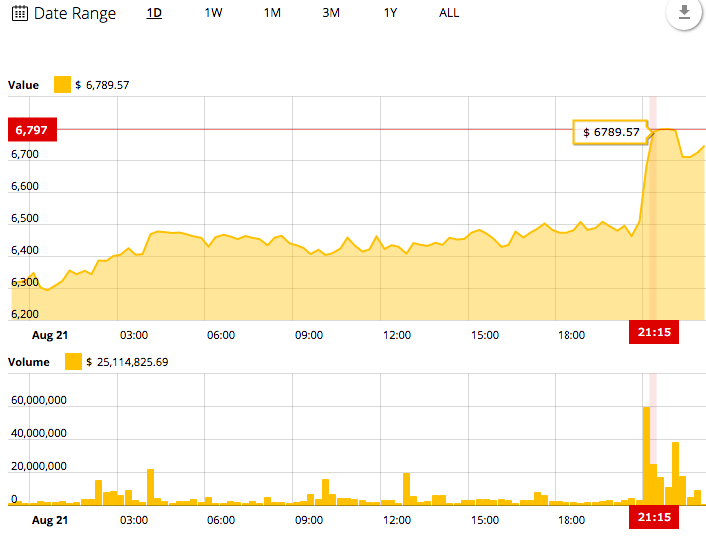 Bitcoin is also boasting almost 6 percent growth on the week, while on the month the coin is down almost 10 percent, according to Cointelegraph’s Bitcoin Price Index.

All except one of the top ten cryptocurrencies have seen major growth during today’s spike, each gaining 4 to 9 percent on the day to press time.

In the top twenty coins, altcoin VeChain (VET) has seen the most significant growth on the day, up a whopping 18.67 percent to trade at $0.015.

As a some commentators pointed out on Twitter, the sharp upswing across crypto markets began just as leveraged crypto trading platform BitMEX announced it was halting trading for scheduled maintenance at 1:00 AM UTC.

Crypto persona and self-described “crypto prophet” Beastlorion posted a series of Twitter polls in the hours leading up to BitMEX’s scheduled shutdown suggesting that the move would affect Bitcoin’s price.

On its official website, BitMEX describes itself as a “Peer-to-Peer Trading Platform that offers leveraged contracts that are bought and sold in Bitcoin,” reporting daily trade volumes of $3.76 billion. At press time, CoinMarketCap also lists BitMEX’s total BTC/USD trade volumes over the past 24 hours at around $3.7 billion.

According to CoinMarketCap, currently the largest crypto exchange by daily trade volume is Binance, with around $1.12 billion in total trades of all pairs over the 24-hour period to press time.

At press time, BitMEX’s most recent tweet, posted two hours ago, announced that it would be resuming trading within minutes.